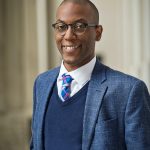 Candidate Statement
Bryan Roby demonstrates that he is uniquely positioned to serve on this Committee through his scholarship on policing and race in Israel; leadership work in the U-M Advancing Public Safety Task Force; and through teaching students how to file and analyze FOIA requests and responses. The only effective manner of creating an environment of trust between citizen and police is to ensure that each party is heard and that issues are resolved in a just and equitable manner for the complainant and the officer. For over 10 years, Roby has written and taught about the importance of transparency and accountability in police-communal relations in the US and the Middle East.

Biography
Bryan K. Roby is Assistant Professor of Jewish and Middle Eastern History in the Dept. of Judaic Studies, with a promotion to Associate Professor effective September, 2022. His expertise is on 20th century Israeli and North African Jewish history. His research and teaching interests include Jewish racial constructs; policing and civil rights globally; and 19th and 20th century North African history. He has written on social justice protests in Israel and is currently working on a second book project on questions of Blackness in the Middle East.

Candidate Statement
I taught at U-M since 1987 – and I’ve seen plenty need for the police on campus “in my time.” Some of it necessary, some of it completely unnecessary. We are in volatile times, and students and faculty alike have legitimate fear about the presence of guns and gun violence on campus. These things do need oversight!

I have also been the victim of assault and needed DPS. They intervened. I got to know well some of the officers, and can attest to their excellence, work ethic and lovingkindness. They would welcome faculty input – I’m positive. I’d love to be involved in this process.

Biography
Stephen Rush has written 7 operas, fifty works for Dance, chamber and electronic works, concertos, and three symphonies. He has authored “Free Jazz, Harmolodics and Ornette Coleman,” as well as a book on Anti-Racist Music Theory. He has over 35 recordings on more than 10 labels.

He is a Professor of Music at the University of Michigan, where he founded the Digital Music Ensemble (DME) which he has directed for 25 years. He works with scientists, dancers and sculptors, and is invested in the campus Hindu Community.